The Quit India Movement or the August Movement was launched by Mahatma Gandhi on August 8, 1942. It was a Civil Disobedience Movement to gain independence from British rule. This movement was Gandhiji’s call to the British to withdraw from India.

Some notable highlights of the Quit India Movement are as follows:

• After the Second World War began in 1939 with Britain and Germany pitted against each other, India too became a part of this war being an important British colony. Some Congress leaders were unhappy with India’s involvement in the war and called for India’s withdrawal from it. A delegation under Stafford Cripps was sent to negotiate with the unhappy Congress leaders, which became popular by the name of Cripps mission. The deal was to support Britain in the war in exchange of which the British promised freedom. But the Congress leaders refused the proposal.

• The Indian National Congress passed a resolution on July 14, 1942, seeking complete freedom from British rule. They had resolved that if the British did not listen to their demands, they would start a mass civil disobedience movement. Britain was involved in the War and with many political changes going on in Britain, the demands of the Congress were not met. This dissatisfaction was also one of the triggers for the Movement. 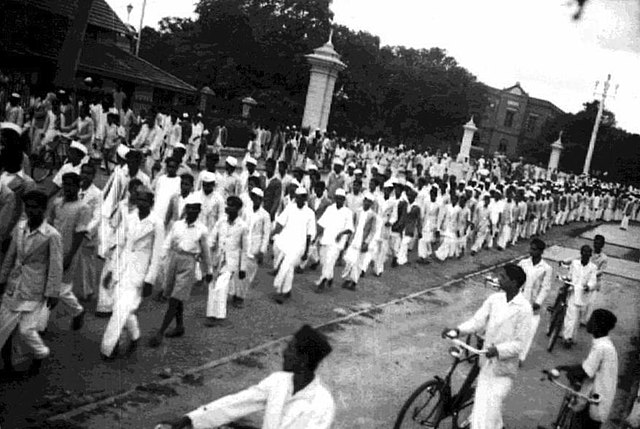 • The famous ‘Do or die’ call by Gandhiji was given during this movement.

• As soon as the resolution was passed and call for Civil Disobedience made, all the national leaders were arrested. Due to the absence of any leader outside, the masses turned violent and burnt government offices. The Army was called in and about a lakh people were arrested. The leaders had no contact with anyone from inside the jail. Civil rights, freedom of speech and freedom of the press were abolished by the British.

• It was during this time that Gandhiji lost his wife Kasturba Gandhi and his trusted secretary Mahadev Desai. He called for a fast, and after twenty-one days due to his ill-health was released from prison.

• When the British atrocities increased on the masses, Aruna Asaf Ali took the tri-colour and hoisted it in the Gowalia Tank Maidan. It was the first time the Indian flag was hoisted.

• Aruna Asaf Ali and Usha Mehta were passing news through an underground radio station and were shifting the equipment to avoid getting caught.

• All the leaders and freedom fighters who were arrested were released three years later after the World War ended.

• One major achievement of the movement was that it kept the Congress united.

• Another significance of the Movement was that during it the British realised it would not be able to continue governing India for long and therefore started thinking of ways to exit India in a peaceful and respectable manner.

Five Foods Not To Be Missed In Greece

Yercaud: the Jewel of Eastern Ghats 

Connect With Your Soul At Atman